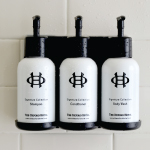 Luxury Hotels Use EcoEclipse Dispensers to Improve Sustainability in Over 13,000 Rooms

According to the 2016 Green Lodging Trends Report, 41% of hotels now use refillable soap and shampoo dispensers to promote their sustainability efforts and ReadyCare sees similar trends among its hotel customers. According to President Gary Robie, “since launching our innovative EcoEclipse dispenser system five years ago, we’ve seen many more higher-end hotels exploring dispensers for their guest rooms. This trend is driven by the push for better sustainability, the cost-saving benefits of dispensers, and the fact that EcoEclipse dispensers can be customized to reinforce a property’s brand.”

As sustainability become increasingly important to guests, hotels continue to increase their investment in green initiatives throughout their properties. One area often associated with unneeded waste is the bathroom where traditional amenity bottles are often not used entirely and thrown out by housekeeping staff after a guest stay. ReadyCare estimates that just one triple-unit EcoEclipse shower dispenser keeps over 1,000 plastic amenity bottles out of the landfill each year. If installed throughout an entire hotel, these dispensers can have a meaningful environmental impact.

In addition to being eco-friendly, shower & vanity dispensers also make financial sense. After analysis of hundreds of hotel installations, ReadyCare has determined that EcoEclipse dispensers can save a hotel up to 60% of the costs associated with traditional in-room amenity bottles. This savings includes reduced product costs, less housekeeping labor and the elimination of costs associated with bottle disposable.

Another important driver for the increased adoption of EcoEclipse dispensers by higher-end hotels is the dispenser’s ability to be customized to match a hotel’s brand and in-room design. With over 50 custom color options, multiple finish choices and custom silk-screen capabilities for logo printing, hotel properties can create a dispenser that integrates seamlessly into their rooms. In addition, properties can select one of ReadyCare’s branded liquids or create their own signature formula and scent.

Looking ahead, the future looks bright for EcoEclipse dispenser adoption by luxury hotels around the country. “Every hotel customer that has tested our EcoEclipse dispensers in a few rooms has decided to roll them out hotel-wide,” stated Robie. “Guests just love the convenience of our dispensers and their positive impact on the environment, while hotel management teams appreciate the meaningful cost savings. It’s a win-win for everyone involved.”